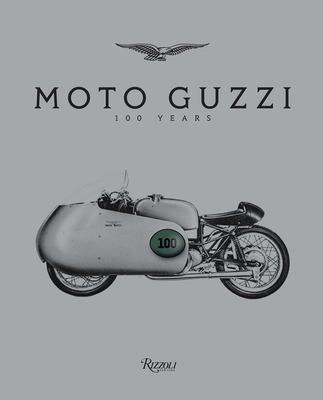 
Special Order—Subject to Availability
This book tells the story of one of the world’s most innovative, beloved, and famous motorcycle manufacturers on its 100th anniversary.

In 1921, Giorgio Parodi founded Moto Guzzi with the mechanic Carlo Guzzi. The purpose of the company was to design innovative motorcycles in the Mandello del Lario headquarters on Lake Como, where the factory still stands today.

Moto Guzzi bikes immediately stood out for their high performance and technical sophistication. Their greatness was proven by competition wins, and these sporting triumphs were accompanied by commercial success that made Moto Guzzi the most important motorcycle manufacturer in Italy. These victories did not happen by chance, but were the result of continuous innovation. The company soon decided to withdraw from competitions because of its “manifest superiority” and instead focused on production. It has since continued to churn out iconic innovations and models, like the California, which was chosen by the LAPD for their patrols.

Moto Guzzi is no longer just a motorcycle but, like Harley-Davidson, it has become a style, a philosophy and a sign of belonging to the Guzzi tribe that unites movie stars like Ewan McGregor with acclaimed designers like Tom Dixon, musicians like Billy Joel, and astronauts such as Paolo Nespoli.

Jeffrey Schnapp has taught at Stanford and Harvard. Ewan McGregor is a Hollywood star and motorbike addict. Greg Lynn is an American architect, and a professor at the UCLA School of the Arts and Architecture. He is CEO and co-founder of the robotics company Piaggio Fast Forward. Melissa Holbrook Pierson is a writer and essayist. Mat Oxley is a world-renowned motorcycle journalist. Akira Nishimura is a Japanese motor journalist and book writer. Paolo Nespoli is an Italian astronaut.  Marco Masetti is a journalist specialized in motorbike racing. Ringo is a dj, an anchorman and a creator of radio programs. He loves rock and motorcycles. Tom Dixon is a lighting designer and a motorcycle enthusiast.