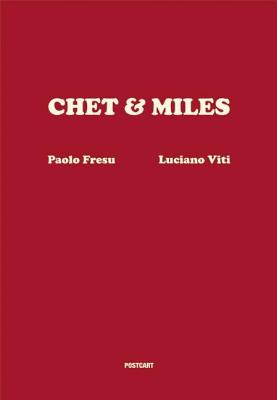 1987: The photographer Luciano Viti succeeds in what remains one of the most significant events in the history of music photography, that of realising photo- sessions with Miles Davis and Chet Baker, two legends of jazz.
During the usual "ten minutes" at his disposal, Viti made a series of stunning and intense portraits that will go down in history. For the first time, after more than twenty-five years of photographic career, Viti's photographs have been published in this book, accompanied by a poetic text by Paolo Fresu, a renowned jazz trumpeter. A unique testimony of rare beauty, celebrating two great and unforgettable musicians who have marked jazz history.

Luciano Viti is a professional photographer who mainly works in the music world. He worked for Grazia Neri photoagency. He has committed himself in photographic works for many record companies such as Sony, Polygram, and Virgin, among others, as well as for advertising campaigns, press campaigns, and record/CD covers.

Paolo Fresu graduated in trumpet studies at the conservatory of Cagliari in 1982 and in the same year he won numerous awards as best Italian jazz talent. In 1996 he was elected best European musician, won the Django d'or, and was nominated best international musician. He teaches both nationally and internationally and he has recorded over 350 records.