Nan Goldin: The Other Side (Hardcover) 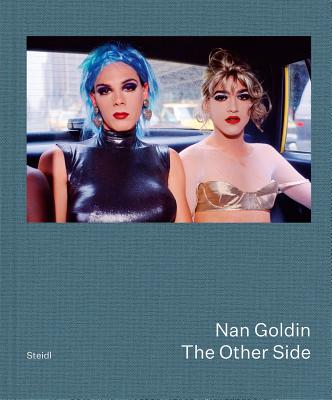 Nan Goldin: The Other Side (Hardcover)

This is a book about beauty. And about love for my friends. -Nan Goldin

One of Time Magazine's best photo book of 2019

This is an expanded and updated version of Nan Goldin's seminal book The Other Side, originally published in 1993, featuring a revised introduction by Goldin, and, for the first time, the voices of those whose stories are represented. Published at a time when discourse around gender and sexual orientation is evolving rapidly, The Other Side traces some of the history that informs this new visibility. The first photographs in the book are from the 1970s, when Goldin lived in Boston with a group of drag queens and documented their glamour and vulnerability. In the early 1980s, Goldin chronicled the lives of transgender friends in New York when AIDS began to decimate her community. In the '90s, she recorded the explosion of drag as a social phenomenon in New York, Berlin, Bangkok and the Philippines. Goldin's newest photographs are intimate portraits, imbued with tenderness, of some of her most beloved friends. The Other Side is her homage to the queens she has loved, many of whom she has lost, over the last four decades. Nan Goldin (born 1953) lives and works between New York, Paris and Berlin. In 1978 Goldin moved to New York, where she presented slideshows in nightclubs and underground cinemas; her best known, The Ballad of Sexual Dependency, was published in 1986. In the '90s Goldin relocated to Berlin where she published A Double Life with David Armstrong and the first edition of The Other Side. In 2000 she moved to Paris. In 2018 Goldin and her colleagues founded P.A.I.N. (Prescription Addiction Intervention Now), a direct action group advocating for addiction treatment and education in the mounting opioid crisis. Her publications with Steidl include The Beautiful Smile (2008) and Diving for Pearls (2016).