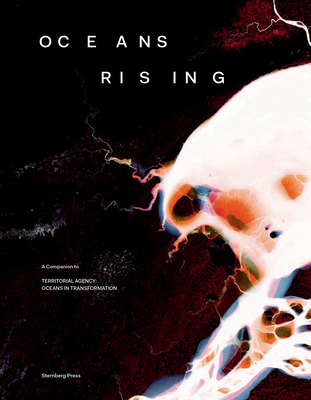 
Special Order—Subject to Availability
Forty-one thoughtful and generous contributions by artists, scholars, scientists, and ocean activists in response to the rapidly changing oceans.

The ocean is rising and with it sea level, water temperature, acidity, algal blooms, and storm surges. Also on the rise are the metrics of accelerated human activity. How are we to fathom the political, aesthetic, and epistemological rise of the oceans from centuries-long invisibilization and forgetting? What ideas and memories do the oceans hold in their depth and reanimate, when the earth’s ecosystems suffer? Asking different questions and using multiple registers of sensing expand the possibilities to engage with the oceanic at this precarious moment and rethink its relations to the terrestrial.

Oceans Rising is a companion reader to “Territorial Agency: Oceans in Transformation,” an independent oceanic research initiative commissioned by TBA21–Academy and operating out of Ocean Space in Venice. It offers forty-one thoughtful contributions by artists, scholars, scientists, and ocean activists in response to the rapidly changing oceans. Writing from places of conflict and concern, the contributions reveal the magnitude and urgency of ecological devastation, but more important, they provide alternative narratives that strengthen our knowledge communities and contribute to worldmaking practices from an oceanic perspective.

Daniela Zyman is the artistic director of Thyssen-Bornemisza Art Contemporary (TBA21). Her research into the ocean spawned from working with TBA21–Academy, ocean-archive.org, and Ocean Space in the former Church of San Lorenzo in Venice. Before joining TBA21 in 2003, she was chief curator of MAK-Austrian Museum of Applied Art in Vienna and MAK-Center for Art and Architecture, Los Angeles.

TBA21–Academy is a contemporary art organization and cultural ecosystem fostering a deeper relationship to the Ocean through the lens of art to inspire care and action.