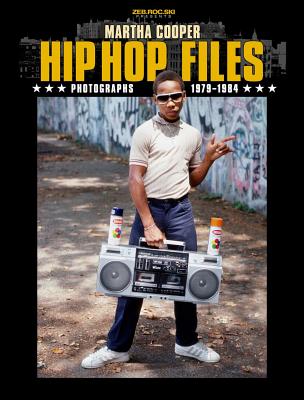 
Not On Our Shelves—Ships in 1-5 Days
Martha Cooper is best known as the preeminent photographer of Hip Hop culture and graffiti art in New York City in the 1970s and 80s. A photojournalist for the New York Post, she began documenting the emerging scene in Brooklyn in the early 70s and eventually amassed an outstanding and original collection of photographs documenting the rise of both East Coast Hip Hop and the distinctive New York Graf Style.

Her book, Hip Hop Files: Photographs 1979-1984, opens a significant part of her extensive archive for the first time. The book documents the earliest beginnings of what would later be a defining American cultural force right on the precipice of mainstream success. As they began to see increased distribution, her photographs became emblematic of the burgeoning scene, both at home and abroad.

In addition to the remarkable photojournalism, Cooper includes quotes, brief interviews, and essays by the individuals featured, from ordinary folk caught up in the scene, to early tastemakers, including CHARLIE AHEARN, PATTI ASTOR, and POPMASTER FABEL.

This is the 10th anniversary of this seminal piece of hip hop history and this edition features a thoughtful introduction by ZEPHYR, one of the earliest NYC street artists and creator of the WildStyle graffiti alphabet.