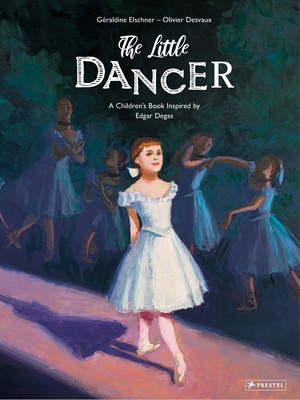 
In Stock—Click for Locations
One of Degas's most celebrated works comes to life in this vibrantly illustrated story of the young ballerina who inspired the artist.

Degas's ballerina paintings are well known and admired and his sculptural work Little Dancer Aged Fourteen--the only
sculpture he exhibited in his lifetime--is particularly beloved for capturing the essence of a ballerina. This book tells the
fictional story of a young girl who dreams of becoming a ballet dancer. Jeanne auditions at the Opera Garnier and moves with her mother, a laundress, to Montmartre where life becomes consumed by rehearsals and classes. One day she meets Mr. D, an artist who asks Jeanne to be his model. As Mr. D works on his sculpture, Jeanne prepares tirelessly for an important performance. The book culminates with Jeanne triumphing at the Opera--and Mr. D completing his sculpture with her help. Olivier Desvaux's gorgeous illustrations, which recall Degas paintings, bring readers into Jeanne's world--the studio where she spends her days, the tiny apartment where she sleeps with her mother, and Mr. D's atelier, where he preserves her story forever. Readers will learn about the life of a young dancer in 19th-century Paris, and at the end of the book they will learn even more about one Degas's most intriguing works.
GÉRALDINE ELSCHNER is an children's book author whose works include The Cat and the Bird, Where Is the Frog?, and The Two Doves (all by Prestel). She lives in Heidelberg, Germany.

OLIVIER DESVAUX is an illustrator and artist who specializes in oil paintings. He lives in Rouen, France.