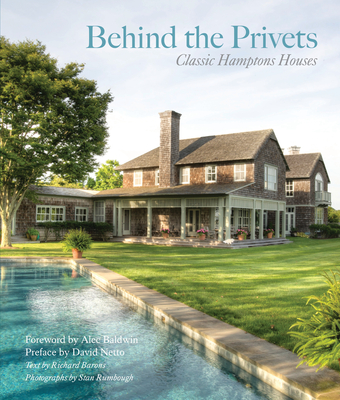 For every lavish, state-of-the-art, over-the-top home under construction in the Hamptons, there is an equally compelling, culturally significant home that has been restored and maintained its original designs. This fascinating glimpse inside these classic homes aims to capture the illustrious architecture and design of the Hamptons historic houses. Accompanied by architectural photographer Stanley Rumbough and Hamptons historian Richard Barons, readers are invited "over the privet hedges" of dozens of homes that offer clues to the Hamptons' storied past. From quaint, 18th-century cottages to the Sister Parish-style décor of Hamptons legend Dina Merrill, the houses profiled here boast historical significance and impeccable style. Heartfelt contributions from Hamptons icons David Netto and Alec Baldwin recall a time before million-dollar homes dominated the area's pristine beaches and lovely lanes.
Copublished by The East Hampton Historical Society and DelMonico Books
RICHARD BARONS is Curator of The East Hampton Historical Society, where he was Executive Director from 2005-2017.
"...photographer Stanley Rumbough and historian Richard Barons take readers behind the hedges that line Hamptons streets and inside marvelous homes, from quaint 18th-century cottages to historic manses renovated by starchitects like Robert A.M. Stern." –Architectural Digest


“The resulting book is the answer to every staged real estate ad and antiseptic, glossy, beige-and-white decorator theme. Real life is messy and accumulating and filled with moments of both dark and light. Real life is lived in. The houses of East Hampton were once lived in, loved in. That’s the very point.” –27East.com