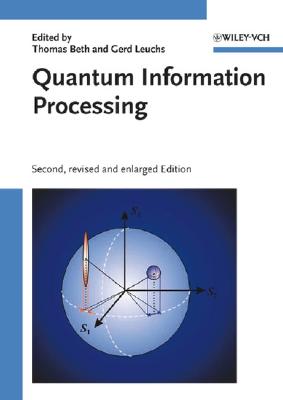 
Special Order—Subject to Availability
Quantum processing and communication is emerging as a challenging technique at the beginning of the new millennium. This is an up-to-date insight into the current research of quantum superposition, entanglement, and the quantum measurement process - the key ingredients of quantum information processing. The authors further address quantum protocols and algorithms. Complementary to similar programmes in other countries and at the European level, the German Research Foundation (DFG) realized a focused research program on quantum information. The contributions - written by leading experts - bring together the latest results in quantum information as well as addressing all the relevant questions.
Thomas Beth studied mathematics, physics and medicine. He received his Ph.D. in 1978 and his Postdoctoral Lecturer Qualification (Dr.-Ing. habil.) in informatics in 1984. From a position as Professor of computer science at the University of London he was apppointed to a chair of informatics at the University of Karlsruhe. He also is the director of the European Institute for System Security (E.I.S.S.). In the past decade he has built up a research center for quantum information at the Institute for Algorithms and Cognitive Systems (IAKS). Professor Thomas Beth passed away in 2005. Gerd Leuchs studied physics and mathematics at the University of Cologne and received his Ph.D. in 1978. After two research visits at the University of Colorado, Boulder, he headed the German Gravitational Wave Detection Group from 1985 to 1989. He then went on to be the technical director of Nanomach AG in Switzerland for four years. Since 1994 he holds the chair for optics at the Friedrich-Alexander-University of Erlangen-Nuremberg, Germany. His fields of research span the range from modern aspects of classical optics to quantum optics and quantum information.