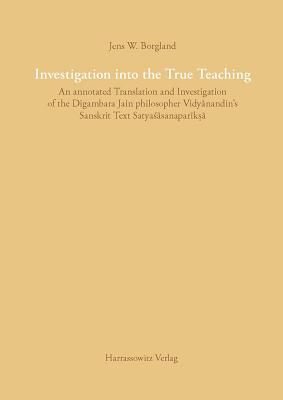 
Special Order—Subject to Availability
(This book cannot be returned.)
Being adherents of but one of the many religious and philosophical traditions that evolved on the Indian subcontinent, the Jains have necessarily had to find various ways in which to coexist and compete in the pluralistic Indian environment. Examination into the True Teaching by Jens W. Borgland focuses on one such way or strategy - namely that of philosophical debate and polemics - by translating and studying the Satyas'asanapariksa (Examination into the true teaching), a 10th century doxography written by Vidyanandin, one of the foremost Digambara Jain philosophers of the time. The text, as it has come down to us, presents and refutes twelve Indian philosophical teachings or schools - the most important of which are Sautrantika and Yogacara Buddhism, Nyaya-Vais'esika, Advaita Vedanta, Mimamsa, Samkhya and Carvaka - with the aim of establishing the superior status of Jain philosophy as the one and only 'true teaching.' It thus offers us a window into the philosophical debates of the period from the perspective of a Digambara Jain philosopher.