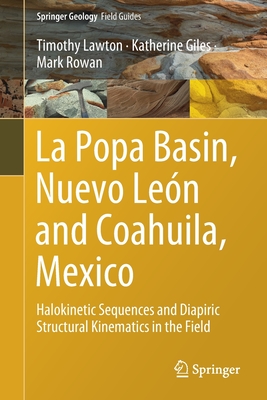 
Not On Our Shelves—Ships in 1-5 Days
This book describes the two excursions accessed from the Monterrey International Airport on the north side of Monterrey, Nuevo Le n, Mexico. Excellent exposures of salt diapirs and flanking strata in La Popa basin, northeastern Mexico, contain world-class examples of salt-sediment interaction that provided the basis for the concept of halokinetic sequences. The basin also contains one of the first secondary salt welds described in outcrop. Two one-day excursions described here provide an easily accessible overview of salt-sediment relations within a short distance of Monterrey, Nuevo Le n, Mexico. Excursion 1 constitutes an introduction to basin stratigraphy, an introduction to halokinetic sequences at El Papalote diapir, and a visit to a salt-cored detachment fold near Hidalgo, Nuevo Le n. Excursion 2 is a visit to La Popa salt weld, where stops at several parts of the weld permit comparison of different structural styles developed along the weld. Each excursion begins and ends at the Marriott Courtyard Aeropuerto Hotel, near the Monterrey airport.
Timothy F. Lawton received B.A. degree in earth sciences from University of California, Santa Cruz, M.S. degree in geology from Stanford, and Ph.D. in geology from the University of Arizona. He is currently Research Scientist with the Bureau of Economic Geology, University of Texas at Austin. His professional interests include regional Mesozoic stratigraphy, sediment-routing systems, and sedimentary basin development of Mexico and the US southwest, as well as salt-sediment interaction in Mexico and Utah. Katherine A. Giles is Lloyd A. Nelson Professor in geological sciences and Director of the Institute of Tectonic Studies at the University of Texas at El Paso. Kate's research focuses on understanding the interplay of tectonics and sedimentary systems. She received degrees in geology from the University of Wisconsin (B.S.), the University of Iowa (M.S.), and the University of Arizona (Ph.D.). Mark G. Rowan is Structural Geologist with degrees from the California Institute of Technology, the University of California, Berkeley, and the University of Colorado. He worked in industry and academia before founding his own company specializing in training, consulting, and research on salt tectonics. Mark has authored over 100 papers, has been AAPG Distinguished Lecturer and International Distinguished Instructor, and is Recipient of the GCSSEPM Doris M. Curtis Medal and the AAPG Robert J. Berg Outstanding Research Award.