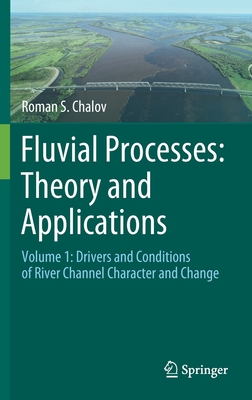 This book presents an overview of the fluvial processes theory developed in the former USSR at Lomonosov Moscow State University for the last 50 years, following the famous manuscript by Professor Makkaveev in 1955. Even being published solely in the Russian language, the theory and the author of the book, Prof. Roman Chalov, are well known in the World. This book consolidates for the first time in English, Chalov's work for the global audience.

The book demonstrates how principles from ﬂuvial geomorphology and hydrology are used to develop an ecosystem approach to river analysis and management. Despite a strong tradition in fluvial geomorphology work in the USSR, unfortunately, little has been made of insights provided on the international stage. The fluvial processes theory accepted in USSR was somewhat isolated during the long period of development from the English-language literature. The studied rivers are mostly located in Northern Eurasia and much different from those described in classical English-language works. Chalov allows the readers to interconnect two Worlds in Geomorphology, building bridges between the classical international geomorphology and the equally in-depth and thorough but isolated research in the USSR.

Roman S. Chalov is World's Leading Scientist in fluvial geomorphology and fluvial river processes.He graduated from the Faculty of Geography, Moscow State University, in 1961. He completed his Doctor of Geographical Sciences (1978) and Professor at Moscow State University (since 1984).He served as Professor of the Hydrology Department, Faculty of Geography, Moscow State University. He is a Head of the Makkaveev's Laboratory (institute) of Soil Erosion and Fluvial Processes (Faculty of Geography, Moscow State University). His research interests include fluvial processes, sediment transport, river channel and erosion, river hydrology.He is Vice-President of the Russian Academy of the Water Resources Research Problems, corresponding member of the European Society for Soil Conservation (ESSC). For more than 10 years, he served as a member of the World Association on Sedimentation and Erosion Research Council. Since the beginning, he serves as a President of the Interinstitutional Scientific Coordinational Council on Erosion, River Channel, and Mouth Processes Research Problems, which is the largest union and truly home of fluvial geomorphologists of Russia and post-Soviet countries.He supervised 39 Ph.D. students who successfully defended Ph.D. thesis, among them scientists from Russia, Ukraine, China, and Mongolia. He has over two hundred academic disciples.