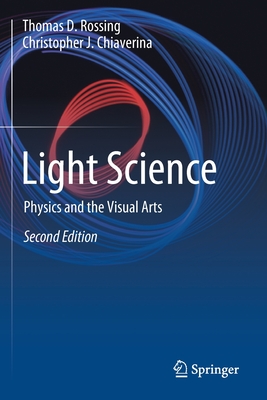 
Not On Our Shelves—Ships in 1-5 Days
Intended for students in the visual arts and for others with an interest in art, but with no prior knowledge of physics, this book presents the science behind what and how we see. The approach emphasises phenomena rather than mathematical theories and the joy of discovery rather than the drudgery of derivations. The text includes numerous problems, and suggestions for simple experiments, and also considers such questions as why the sky is blue, how mirrors and prisms affect the colour of light, how compact disks work, and what visual illusions can tell us about the nature of perception. It goes on to discuss such topics as the optics of the eye and camera, the different sources of light, photography and holography, colour in printing and painting, as well as computer imaging and processing.
Thomas Rossing, Distinguished Professor Emeritus at Northern Illinois University, is currently a Visiting Professor at Stanford University. Since retiring from Northern Illinois he has also been a visiting professor at the University of Edinburgh (Scotland) and Seoul National University (Korea). He is the author of more than 400 publications (including 17 books, 9 U.S. and 11 foreign patents), He is a fellow of ASA, APS, AAAS, and IEEE. Mainly known for his books and papers in acoustics, he has also taught courses on physics for visual artists and has written two books on the subject. His biography appears in the New Grove Dictionary of Music and Musicians and Who's Who in America. He received the Millikan medal (AAPT) Silver Medal in Musical Acoustics and Gold Medal in Acoustics (ASA).Chris Chiaverina taught high school physics for 34 years. He spent the last decade of his teaching career at New Trier High School in Winnetka, IL where he served as director of The Connections Project, an initiative that employs interactive exhibits to demonstrate linkages among the arts, mathematics, and science. His approach to teaching physics was the subject of an installment of the PBS science series "The New Explorers." Chiaverina has written articles on physics education for a variety of journals, is co-author of four textbooks, and has served on the editorial board of The Physics Teacher magazine. In 1997, The American Association of Physics Teachers presented him with its Award for Excellence in Pre-College Physics Teaching. In 2002, Chiaverina served as president of the American Association of Physic Teachers. He is currently editor of The Physics Teacher magazine's "Little Gems" column and presenter of workshops for science teachers in the United States and abroad.