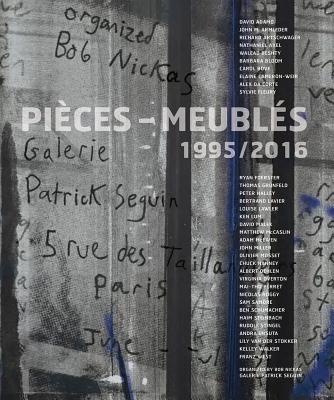 Pi ces-Meubl s is the title of a two-part exhibition, held in 1995 and 2016, curated by New York art critic Bob Nickas at the invitation of Galerie Patrick Seguin. The 1995 exhibition compared contemporary art with 20th-century design, inviting around 20 artists to choose a piece of furniture to interact with their work or to integrate it by creating a new work. The 2016 exhibition was centered around Jean Prouv , whose 6x6 dismountable house, the Maison des Sinistr's de Lorraine, had been installed at Galerie Patrick Seguin. Among the invited artists, some of whom participated in both exhibitions, were John Armleder, Richard Artschwager, Bertrand Lavier, Louise Lawler, Adam McEwen, Albert Oehlen, Haim Steinbach, Rudolf Stingel and Franz West.

This book illustrates these two innovative exhibitions. Introduced with a substantial preface by Nickas, Pi ces-Meubl s is abundantly illustrated with in-situ photographs, as well as archival images for the furniture and architectural components of the shows.