Flavors from the French Mediterranean (Hardcover) 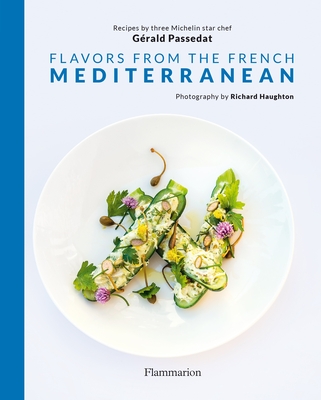 Flavors from the French Mediterranean (Hardcover)


Special Order—Subject to Availability
A Michelin three-star French chef divulges how to make eighty classic Mediterranean recipes at home. Overlooking the sparkling Mediterranean Sea, chef Gérald Passédat draws inspiration from the abundance of local seafood, sun-ripened vegetables, fragrant herbs, and sumptuous wines. Photographs of his beautifully prepared recipes are complemented by the spectacular land- and seascapes of the south of France—rolling vineyards, olive groves, shady terraces, bustling summer markets, and medieval towns aglow in the warm golden light of afternoon sun.The Mediterranean diet is the world’s healthiest delicious cuisine, and chef Passédat shares eighty of his classic, generous, and easy-to-prepare recipes that celebrate fresh produce and an overall healthy lifestyle. Appetizers include Provençal-style stuffed vegetables, homemade tabbouleh, pizzas and pissaladières, squid marinades, and delicious fresh salads. Main courses range from gnocchi, herbed meatballs, roasted duck, and spelt risotto to the region’s famous bouillabaisse fish stew. Desserts include fruit and verbena soup, roasted figs, or a bright lemon tart. Chef Passédat earned the famed Michelin guide’s highest honor, a three-star rating, in 2008—one of only twenty-seven chefs in France and 117 in the world to enjoy such a distinction. Here, he divulges his tips and tricks garnered over nearly four decades in the kitchen along with suggested wine pairings for each dish.
Gérald Passédat has held a Michelin three-star rating since 2008. He owns the Petit Nice restaurant and runs a chic bistro, a restaurant, and a cooking school in Marseilles’ MuCEM art museum. He participated in France’s Top Chef.

Richard Haughton, a London-based lifestyle photographer, has contributed to numerous award-winning cookbooks including Astrance: A Cook’s Book and Le Cinq.
"If you look at [Flavors from the French Mediterranean], you will want to journey too to the south of France. All the way south to the coast with its abundance of wonderful foods so beautifully displayed in this book. . . There literally is not one recipe in the book that I don’t want to try. Not one. It’s all that impressive and that inviting. . . Oh, if you are a food photographer or a stylist, then this book is a marvelous training ground. The photos here are delightfully superior."
-COOKING BY THE BOOK