A Case of Possession (Charm of Magpies #2) (Paperback) 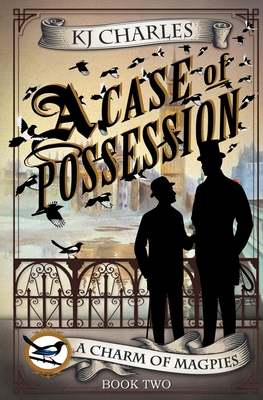 A Case of Possession (Charm of Magpies #2) (Paperback)

This is book number 2 in the Charm of Magpies series.

Magic in the blood. Danger in the streets.

Lord Crane has never had a lover quite as elusive as Stephen Day. He knows Stephen's job as justiciar requires secrecy, but the magician is doing his disappearing act more than seems reasonable-especially since Crane will soon return to his home in China. When a blackmailer threatens to expose their illicit relationship, there's only one thing stopping Crane from leaving the country he loathes: Stephen.

Stephen has problems of his own. As he investigates a plague of giant rats sweeping London, his sudden increase in power, boosted by his blood-and-sex bond with Crane, is rousing suspicion that he's turned warlock. With all eyes on him, the threat of exposure grows. Stephen could lose his friends, his job and his liberty over his relationship with Crane. He's not sure if he can take that risk much longer. Crane isn't sure if he can ask him to.

The rats are closing in, and something has to give...

KJ Charles is a writer and editor. She lives in London with her husband, two kids, a garden with quite enough prickly things, and a cat with murder management issues. Find her at www.kjcharleswriter.com for book info and blogging, on Twitter @kj_charles for daily timewasting and the odd rant, or in her Facebook group, KJ Charles Chat, for sneak peeks and special extras.