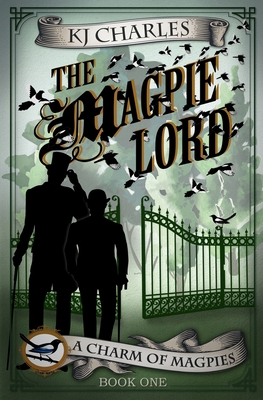 This is book number 1 in the Charm of Magpies series.

A lord in danger. A magician in turmoil. A snowball in hell.

Exiled to China for twenty years, Lucien Vaudrey never planned to return to England. But with the mysterious deaths of his father and brother, it seems the new Lord Crane has inherited an earldom. He's also inherited his family's enemies. He needs magical assistance, fast. He doesn't expect it to turn up angry.

Magician Stephen Day has good reason to hate Crane's family. Unfortunately, it's his job to deal with supernatural threats. Besides, the earl is unlike any aristocrat he's ever met, with the tattoos, the attitude... and the way Crane seems determined to get him into bed. That's definitely unusual.

Soon Stephen is falling hard for the worst possible man, at the worst possible time. But Crane's dangerous appeal isn't the only thing rendering Stephen powerless. Evil pervades the house, a web of plots is closing round Crane, and if Stephen can't find a way through it-they're both going to die.

KJ Charles is a writer and editor. She lives in London with her husband, two kids, a garden with quite enough prickly things, and a cat with murder management issues. Find her at www.kjcharleswriter.com for book info and blogging, on Twitter @kj_charles for daily timewasting and the odd rant, or in her Facebook group, KJ Charles Chat, for sneak peeks and special extras.