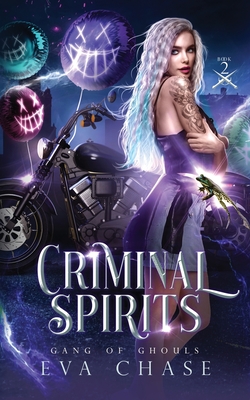 Not the only psychos in town...

Falling for the ghosts of murdered gangsters who were your imaginary friends once upon a time? I'll admit it's a little unusual. But they're back and totally real, and it's hard to argue with their admittedly obsessive level of devotion.

Unfortunately, their violent dedication isn't enough to bring down the powerful man who hurt my little sister. I have to take matters into my own hands. I just wish I had a better grip on this marshy magic I've discovered in myself.

If that wasn't enough to deal with, the guys are stirring up trouble both in their search for their long-ago murderers and the pasts of the hosts they've taken over. Trouble that's arrived with guns blazing. And I've still got that gaping blank in my memory.

My past holds more secrets than I know. They just might shatter every hope I have of a happily ever after.

*Criminal Spirits is the second book in a darkly humorous new paranormal romance series by bestselling author Eva Chase. If you love sarcastic heroines with unexpected powers, obsessive supernatural men who'll do anything to defend their woman, and plenty of mystery and mayhem, dive right in *