The Mystery of the Cathedrals (Paperback) 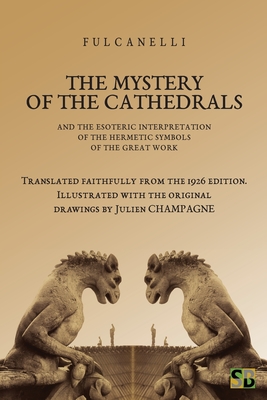 The Mystery of the Cathedrals (Paperback)

This edition of The Mystery of the Cathedrals offers an English translation of the original 1926 edition of Le Myst re des Cath drales, retaining the original drawings from that edition.

In 1957, long after Fulcanelli's disappearance, a second edition of Le Myst re des Cath drales was published in France, with important changes. Most of the drawings were replaced by photographs. The 2nd edition also added a new preface and a new chapter, "The Cyclic Cross of Hendaye", with more images.

Eug ne Canseliet, a disciple of Fulcanelli and in charge of his manuscripts, wrote the preface to the 2nd edition and to many other editions of Fulcanelli's works, but he never explained why the original drawings were replaced by photographs. Most of the photographs in the 2nd edition are similar to the original drawings, although they are not the same, and in three different images the differences are noticeable.

The current English edition of Le Myst re des Cath drales, translated by Mary Sworder, is based on the second edition of 1957, and shows photographs instead the original drawings.

This new translation faithfully preserves the drawings by Julien Champagne and the original numbering of the images, from 1 to 35. The text of the original edition was also translated anew, without introducing any of the changes found in most recent editions. The first edition of Le Myst re des Cath drales fills an important place in the history of Alchemy. Newer editions added more material, but they couldn't replace the first one.

Eug ne Canseliet, said, in the preface for the 1926 edition: "the key to the major arcane is given, without any fiction, by one of the figures that adorn this work". Photographs and drawings are not the same and serve different purposes; photographs only show the same things that the naked eye can perceive, but drawings offer the illustrator a way to accentuate different aspects of the images, and thus add more symbolic depth to the scenes depicted.

There are also many small details that differ between the drawings and the photographs, but we will say no more, it is up to the reader to extract the symbolic meanings of the original drawings, aided by the masterful exposition of Fulcanelli, which is shown in this translation as originally presented in its first edition, including the dedication to the brothers of Heliopolis and the strange coat of arms at the end of the text.