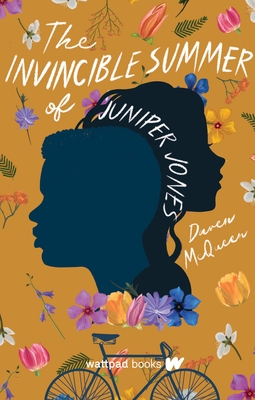 There are some friends you never forget.

It’s the summer of 1955. For Ethan Harper, a biracial kid raised mostly by his white father, race has always been a distant conversation. When he’s sent to spend the summer with his aunt and uncle in small-town Alabama, his blackness is suddenly front and center, and no one is shy about making it known he’s not welcome there. Enter Juniper Jones. The town’s resident oddball and free spirit, she’s everything the townspeople aren’t—open, kind, and accepting.

Armed with two bikes and an unlimited supply of root beer floats, Ethan and Juniper set out to find their place in a town that’s bent on rejecting them. As Ethan is confronted for the first time by what it means to be black in America, Juniper tries to help him see the beauty in even the ugliest reality, and that even the darkest days can give rise to an invincible summer . . .

Daven McQueen grew up outside of Los Angeles, California, and graduated from Brown
University, where she earned a BA in literary arts and economics. Her works on Wattpad include
December, Beautiful Dreamer, and Superior, which received a Watty Award for Science Fiction.
When she’s not writing, Daven can be found tap dancing, embroidering, cooking, and eating
dessert. She currently lives in Boston, Massachusetts, with her cat, and works in education.

*"A gorgeous, memorable story that deserves a place on both school and public library shelves." —School Library Journal, Starred Review

". . . one incredible book about a summer that changed so many lives" —Book Nerd Cafe

"The underlying message of the story – that friendship is possible despite differences, and that everyone has the right to respect – is one that resonates as much today as it did in the Alabama of 1955." —Canadian Review of Materials

“[A] powerful . . . story of friendship, respect and compassion.”—Ms. Magazine

"Heart-breaking and well written, THE INVINCIBLE SUMMER OF JUNIPER JONES is a YA historical fiction about racism, friendship, and the events that are indelibly printed on our souls."—YA Book Central

“McQueen deftly balances the rollicking summer adventures of Ethan and Juniper with the gravity of racial discrimination; Ethan’s wrenching initiation into what it means to be Black in the United States is handled with candor and force…. The book provides a nuanced look at its characters’ turmoil, guilt, fury, and love.”—Boston Globe

"In the foreground of McQueen's novel are characters so vulnerable, their emotional complexities mirror those we struggle with and cherish in our own lives. McQueen's writing also reveals the precarious balance between hope and sorrow related to these controversial themes.”—Shelf Awareness for Readers

"Readers aged 12 and up will laugh and cry their way through this illuminating story." —Calgary Herald