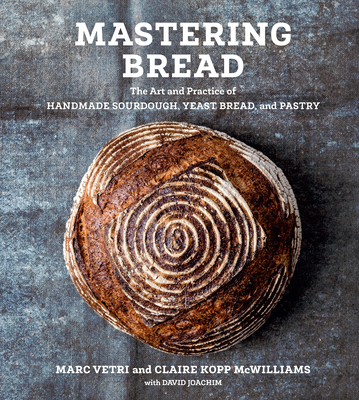 
On Our Shelves Now at:
From a master of the artisan bread movement comes a comprehensive guide to making incredible bread at home, featuring more than 70 delicious recipes

“Here, finally, is the one bread book that every cook needs on their kitchen worktable.”—Andrew Zimmern, host of Bizarre Foods

The Vetri Cucina Bread Program began over a decade ago and has been part of the American movement to reclaim high-quality bread as a cornerstone of our food culture. In Mastering Bread, Marc Vetri and his former head baker, Claire Kopp McWilliams, show home cooks how to create simple breads with unique flavors in a home oven.

Included are more than seventy recipes for their bestselling sourdough and yeast loaves as well as accompaniments to serve with the breads. Their process of bread-making is broken down into three easy-to-digest chapters: Mix, Shape, and Bake. Another chapter includes recipes for enjoying breadin dishes such as Bruschetta, Panzanella, and Ribollita. There’s even a bonus chapter revealing the secrets of Vetri’s coveted Panettone. This book shares everything that Vetri and McWilliams have learned over the years about the art and science of making incredible bread. They explain how to use fresh milled and whole-grain flours as well as local and regional wheat varieties, with easy instructions for adapting bread recipes for success with whatever flour is available in your market. Included throughout are bios and interviews with grain farmers, millers, and bread bakers from around the nation.

Mastering Bread is a master class from an award-winning chef who makes world-class artisan bread easy to bake for both home cooks and professionals alike.
Trained in Bergamo, Italy, by some of the region's most noted chefs, Marc Vetri is the chef/owner of Pizzeria Vetri, Vetri Ristorante, Osteria, Amis, and Alla Spina, all located in Philadelphia. He has also opened a series of restaurants in partnership with Terrain, with locations in California and Texas. Vetri was named one of Food & Wine's Ten Best New Chefs; he also won the James Beard Award for Best Chef Mid-Atlantic. Vetri has been profiled in Gourmet, Bon Appétit, and the New York Times, and is the author of Mastering Pasta, Mastering Pizza, Il Viaggio di Vetri, and Rustic Italian Food.

David Joachim is the author of the New York Times best-seller A Man A Can A Plan and a co-writer on numerous cookbooks.