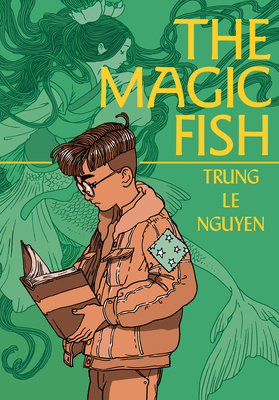 “Tien connects with his mother through the fairy tales they read together to improve their English. As he finds escape in the stories, he tries to find the words to tell his parents he’s gay. Meanwhile, his mother’s memories of her family and home in Vietnam are awakened by the stories she reads with her son. Beautifully done and truly magical.”
— Myles Mickle, Village Square Booksellers, Bellows Falls, VT

Tiến loves his family and his friends…but Tiến has a secret he's been keeping from them, and it might change everything. An amazing YA graphic novel that deals with the complexity of family and how stories can bring us together.

But Tiến still enjoys reading his favorite stories with his parents from the books he borrows from the local library. It's hard enough trying to communicate with your parents as a kid, but for Tiến, he doesn't even have the right words because his parents are struggling with their English. Is there a Vietnamese word for what he's going through?

Is there a way to tell them he's gay?

A beautifully illustrated story by Trung Le Nguyen that follows a young boy as he tries to navigate life through fairytales, an instant classic that shows us how we are all connected. The Magic Fish tackles tough subjects in a way that accessible with readers of all ages, and teaches us that no matter what—we can all have our own happy endings.
Trung Le Nguyen, also known as Trungles, is a comic book artist and illustrator working out of Minnesota. He received his BA from Hamline University in 2012, majoring in Studio Art with a concentration in oil painting and minoring in Art History. He has contributed work for Oni Press, BOOM! Studios, Limerence Press, and Image Comics. He is particularly fond of fairy tales, kids' cartoons, and rom-coms of all stripes. The Magic Fish is his debut graphic novel.
A Bulletin of the Center for Children’s Books 2020 Blue Ribbon Selection

“[A] gorgeously drawn…story of a first-generation Vietnamese American who is struggling with coming out to his parents.” —Forbes

“A sparkling debut…about the child of Vietnamese immigrants who teaches through fairy tales—yet wrestles with how to come out to his family.” —The Washington Post

“Warm, loving family and friends are a refreshing alternative to immigrant stories that focus on family problems. Beautifully illustrates how sharing old stories can be the best way to learn how to share new ones.” —Kirkus Reviews, Starred Review

“The magic happens here on every page, the perfection personified by debut author/artist Nguyen’s autobiographical homage to the infinite power of storytelling.” —Booklist, Starred Review

“Nguyen’s poignant debut captures the perspectives of, and essence of the bond between, a parent and child, proving that language—and love—can transcend words.” —Publishers Weekly, Starred Review