We Really Do Care (Hardcover) 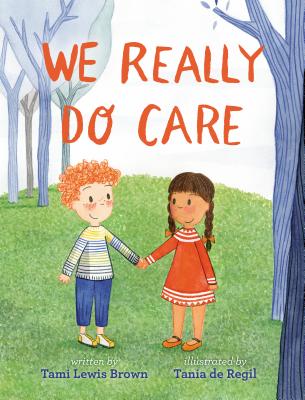 We Really Do Care (Hardcover)


Special Order—Subject to Availability
Inspired by current events, this picture book shows the importance of compassion, empathy, and demonstrates how even the smallest act of kindness can make a difference.

A little boy has a ball. It's his, and he really doesn't care if nobody else has a ball. He's not sharing. He's not sharing his pets either. Or his family. Especially not his brother. But then he realizes that both he and the new little girl he meets--the one who's all alone without a ball or a pet or a family of her own--are actually quite similiar. And when he sees their similarities instead of their differences, he's happy to share. Even his little brother.

With gentle text from Tami Lewis Brown and sweet illustrations from Tania de Regil, this poignant and touching picture book challenges each and every one of us to to lend a helping hand. Because we really should care. Perfect for fans of Be Kind and All Are Welcome.
TAMI LEWIS BROWN holds an MFA in Writing for Children from Vermont College. She has been a lawyer, and more recently, writer-in-residence and librarian at The Sheridan School in Washington, D.C., as well as the author of The Map of Me and Soar, Elinor! Tami grew up in Kentucky and attended Smith College in Northampton, Massachusetts. Now she lives in one of the oldest houses in Washington, D.C.

TANIA DE REGIL is an author and illustrator from Mexico City. When she was five, she moved to Stockholm, Sweden with her family, where she discovered her love of reading and decided that she wanted to be a professional author some day. Tania's American debut picture book, A New Home, which she both wrote and illustrated, will publish in Spring 2019 by Candlewick Press.