Wheat Belly (Revised and Expanded Edition): Lose the Wheat, Lose the Weight, and Find Your Path Back to Health (Paperback) 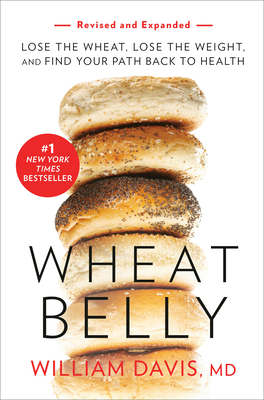 Wheat Belly (Revised and Expanded Edition): Lose the Wheat, Lose the Weight, and Find Your Path Back to Health (Paperback)


Not On Our Shelves—Ships in 1-5 Days
#1 NEW YORK TIMES BESTSELLER • The groundbreaking phenomenon that kick-started the grain-free movement, now revised and expanded with the latest nutritional and scientific research findings!

“One of the most impactful nutrition-based books of modern times.”—David Perlmutter, MD, #1 New York Times bestselling author of Grain Brain

First published in 2011, Wheat Belly introduced the world to the hidden dangers of modern wheat and gluten, revolutionizing the conversation around health and weight loss forever. Nearly a decade later, Dr. William Davis’s provocative indictment of the dominant staple in our diet continues to inspire countless people to “lose the wheat.”

After witnessing thousands of patients regain their health after giving up wheat, Davis reached the disturbing conclusion that wheat is the single largest contributor to the nationwide obesity epidemic—and its elimination is key to drastic weight loss and optimal health. In Wheat Belly, Dr. Davis provides readers with a user-friendly, step-by-step plan to navigate a new wheat-free lifestyle. Now updated with refreshed recipes, new program guidelines, and cutting-edge nutritional findings, Wheat Belly is an illuminating look at what truly is making Americans sick and an action plan to clear our plates of this harmful ingredient.
William Davis, MD, is a New York Times bestselling author and a cardiologist who advocates unique, insightful, and cutting-edge strategies to help individuals discover the health hidden within them. His Wheat Belly Blog has been visited by millions of people. Dr. Davis has also shared his passion for wheat-free living on national television shows including The Dr. Oz Show and CBS This Morning. His Wheat Belly Total Health program has become a public television special, now airing nationwide. He lives in Wisconsin.
“When Wheat Belly was first published in 2014, it was greeted with much scientific and public skepticism. But the ensuing years have seen widespread validation of Dr. Davis’s groundbreaking ideas that ultimately manifested a positive effect on global nutrition. In the new Revised and Expanded edition, Dr. Davis humbly explores this validation and brings us up-to-date not only on the science of Wheat Belly, but more important, how we can all incorporate this salubrious information into our lifestyle programs to experience better health and disease resistance.”—David Perlmutter, MD, #1 New York Times bestselling author of Grain Brain

“Fascinating, compelling, and more than a little entertaining, Wheat Belly may be the most important health book of the year.”—Dana Carpender, author of 500 Low-Carb Recipes

“Dr Davis’s comprehensive, readable and witty book reveals that wheat, far from being the staff of life, is in fact the stuff of nightmares. Take his advice to lose wheat from your diet and you'll likely be paid back many times over in the form of a slimmer, healthier body and a better functioning brain.”—Dr. John Briffa, BSc, MB, BS, nutritional physician and author of Waist Disposal