War of the Spark: Ravnica (Magic: The Gathering) (Hardcover) 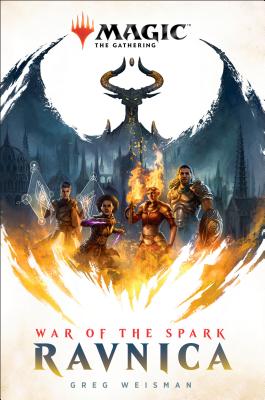 War of the Spark: Ravnica (Magic: The Gathering) (Hardcover)


Special Order—Subject to Availability
NEW YORK TIMES BESTSELLER • Experience the first official adventure in Magic: The Gathering’s multiverse in nearly a decade as the ultimate battle begins on Ravnica.

Teyo Verada wants nothing more than to be a shieldmage, wielding arcane energies to protect his people from his world’s vicious diamondstorms. When he’s buried alive in the aftermath of his first real tempest, the young mage’s life is about to end before it can truly begin—until it doesn’t. In a flash, a power he didn’t know he had whisks him away from his home, to a world of stone, glass, and wonder: Ravnica. Teyo is a Planeswalker, one of many to be called to the world-spanning city—all lured by Nicol Bolas, the Elder Dragon. Bolas lays siege to the city of Ravnica, hungry for the ultimate prize: godhood itself. His unparalleled magic and unstoppable army appear poised to bring the city to utter ruin.

Among those who stand in the way of Bolas’s terrifying machinations are the Gatewatch, Planeswalkers sworn to defeat evil, no matter where it’s found. But as they work to unite the other mages and mount a defense of the city and its people, the terrifying truth of Bolas’s plan becomes clear. The Elder Dragon has prepared a trap to ensnare the most powerful mages from across the Multiverse—and it’s too late to escape.

As forces great and small converge on the city and the battle rages, the stakes could not be higher. If the Gatewatch falters and the Planeswalkers fail, the curtain will fall on the age of heroes—and rise on the infinite reign of Nicol Bolas.
Greg Weisman’s career in television and comic books spans decades. After starting as an editor for DC Comics, where he also wrote Captain Atom, he created and developed Disney’s original series Gargoyles, later writing the Gargoyles and Gargoyles: Bad Guys comic books for SLG Publishing. He has worked as a writer, producer, story editor, and voice actor on Sony’s The Spectacular Spider-Man and Warner Bros.’s Young Justice, and as a writer and executive producer on the first season of Star Wars Rebels. His comic book writing credits include DC’s Young Justice and Star Wars: Kanan, and Marvel’s Starbrand and Nightmask. Weisman also wrote the original novels Rain of the Ghosts and Spirits of Ash and Foam, as well as the World of Warcroft novels World of Warcraft: Traveler and World of Warcraft: Traveler: The Spiral Path. He is blessed to have an amazing wife and two fantastic (grownup) kids.