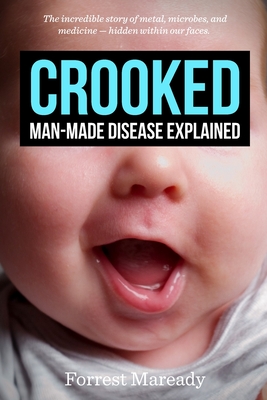 
Not On Our Shelves—Ships in 1-5 Days
(This book cannot be returned.)
Why do babies have lopsided smiles? Why are so many people's eyes misaligned? What started as a simple search to understand this phenomenon turned into a two-year quest that uncovered hidden links between our crooked faces and some of the most puzzling diseases of our time.From autism to Alzheimer's and from chronic fatigue syndrome to Crohn's disease, Crooked methodically goes through the most recent scientific research and connects the dots from the outbreak of metallic medicine in 1800s England to the eruption of neurological and autoimmune disorders so many are suffering from today. If the theories put forth in this book are true, the convergence of metals, microbes and medicine that started two hundred years ago may have set humanity on a path of suffering that could make the deadliest epidemics in history pale in comparison. Thankfully, for the millions who are afflicted, who may have found nothing to explain the cause of their suffering - these same theories could also illuminate the path to healing and recovery.

WITH CHAPTERS & EXPLANATIONS FOR THESE ILLNESSES
Forrest Maready was born in Wilmington, N.C and grew up around a large film studio and the many movies and TV shows that filmed there. After receiving religion and music degrees from Wake Forest University, he plied his trade in the film and television industry for 13 years, working as an editor, audio engineer, visual effects artist or composer on two Muppet movies, Dawson's Creek, Varsity Blues and many other productions. He spent another 10 years working as a creative technologist in the advertising and mobile app space as a programmer, designer and consultant. He maintains a popular Facebook and YouTube series called "My Incredible Opinion" where he opines on the hubris of human beings. Forrest lives in North Carolina with his wife, son & dog.