The Islander: My Life in Music and Beyond (Paperback) 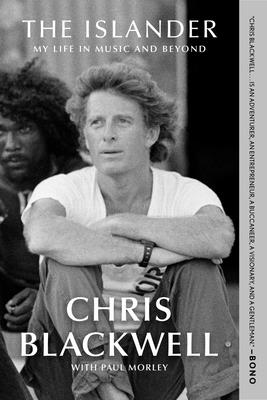 The Islander: My Life in Music and Beyond (Paperback)

By Chris Blackwell, Paul Morley (With)


Coming Soon—Pre-Order Now
In the vein of Sound Man and The Soundtrack of My Life, a lyrical memoir from the founder of one of the greatest music labels of all time, Island Records, about his astonishing life and career helping to bring reggae music to the world stage and working with Bob Marley, U2, Grace Jones, Cat Stevens, and many other icons.

Like these artists, Blackwell never took the conventional route. After a privileged early childhood in Jamaica—crossing paths with Ian Fleming, Noël Coward, and Errol Flynn—he was expelled from the elite British school Harrow for rebellious behavior at age seventeen. Within five years, he had moved back to Jamaica, and founded Island.

Intertwined with the story of Island is that of Bob Marley and the Wailers. After an impromptu meeting with the band in 1972, Blackwell produced the groundbreaking album Catch a Fire, formed a deep bond of mutual trust and friendship with Marley, and became known for helping to bring reggae music to the world stage. He also opened the first Jamaican boutique hotel, on the property of Ian Fleming’s former home, GoldenEye, where all the James Bond books were written.

This engaging memoir from one of the great raconteurs of the late 20th century makes for a giddy ride through some of that era’s most cutting-edge, enduring music. As Bono says, Blackwell “is an adventurer, an entrepreneur, a buccaneer, a visionary, and a gentleman.”
Chris Blackwell is the founder of Island Records, a member of the Rock and Roll Hall of Fame, and is credited with being responsible for turning the world on to reggae music. Blackwell spent his childhood in Jamaica and founded Island Records at the age of twenty-two. He went on to forge the careers of Bob Marley, Cat Stevens, Grace Jones, and U2, among many other high-profile acts, and produced records including Marley’s Catch a Fire and Uprising. Blackwell currently runs Island Outpost, a group of elite resorts in Jamaica, which includes Goldeneye—the former home of author Ian Fleming.

Paul Morley is a writer, broadcaster, and cultural critic who has covered music, art, and entertainment since the 1970s. A founding member of the electronic collective Art of Noise and a member of staff at the Royal Academy of Music, he is the author of a number of books about music including the bestselling The Age of Bowie and A Sound Mind: How I Fell in Love with Classical Music and Decided to Rewrite its Entire History. He collaborated with music icon Grace Jones on her memoir, I’ll Never Write My Memoirs, and his two most recent books are biographies of Bob Dylan, You Lose Yourself, You Reappear, and Tony Wilson of Factory Records, From Manchester With Love.