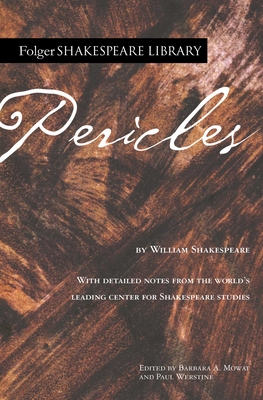 
On Our Shelves Now at:
The authoritative edition of Pericles from The Folger Shakespeare Library, the trusted and widely used Shakespeare series for students and general readers.

Pericles tells of a prince who risks his life to win a princess, but discovers that she is in an incestuous relationship with her father and flees to safety. He marries another princess, but she dies giving birth to their daughter. The adventures continue from one disaster to another until the grown-up daughter pulls her father out of despair and the play moves toward a gloriously happy ending.

​The Folger Shakespeare Library in Washington, DC, is home to the world’s largest collection of Shakespeare’s printed works, and a magnet for Shakespeare scholars from around the globe. In addition to exhibitions open to the public throughout the year, the Folger offers a full calendar of performances and programs. For more information, visit Folger.edu.
William Shakespeare was born in April 1564 in the town of Stratford-upon-Avon, on England’s Avon River. When he was eighteen, he married Anne Hathaway. The couple had three children—an older daughter Susanna and twins, Judith and Hamnet. Hamnet, Shakespeare’s only son, died in childhood. The bulk of Shakespeare’s working life was spent in the theater world of London, where he established himself professionally by the early 1590s. He enjoyed success not only as a playwright and poet, but also as an actor and shareholder in an acting company. Although some think that sometime between 1610 and 1613 Shakespeare retired from the theater and returned home to Stratford, where he died in 1616, others believe that he may have continued to work in London until close to his death.