Donald Trump and His Assault on Truth: The President's Falsehoods, Misleading Claims and Flat-Out Lies (Paperback) 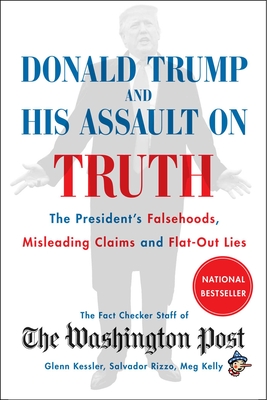 Donald Trump and His Assault on Truth: The President's Falsehoods, Misleading Claims and Flat-Out Lies (Paperback)

In perilous times, facts, expertise, and truth are indispensable. President Trump’s flagrant disregard for the truth and his self-aggrandizing exaggerations, specious misstatements, and bald-faced lies have been rigorously documented and debunked since the first day of his presidency by The Washington Post’s Fact Checker staff.

Donald Trump and His Assault on Truth is based on the only comprehensive compilation and analysis of the more than 16,000 fallacious statements that Trump has uttered since the day of his inauguration. He has repeated many of his most outrageous claims dozens or even hundreds of times as he has sought to bend reality to his political fantasy and personal whim.

Drawing on Trump’s tweets, press conferences, political rallies, and TV appearances, The Washington Post identifies his most frequently used misstatements, biggest whoppers, and most dangerous deceptions. This book unpacks his errant statements about the economy, immigration, the impeachment hearings, foreign policy, and, of critical concern now, the coronavirus crisis as it unfolded.

“An authoritative and pull-no-punches guide through Trump's alternative universe....a reader-friendly reference for voters, reporters and editors who soon will be seeking clarity and context once the fall campaign kicks into full swing.” –The Record

“Donald Trump and His Assault on Truth encapsulates the duplicity we’ve been subjected to these past 3½ years in a way that hopefully will deter our future leaders from thinking truth-telling is optional. No pithy hot takes. Just great journalism.”
—San Francisco Chronicle