The Comedians in Cars Getting Coffee Book (Hardcover) 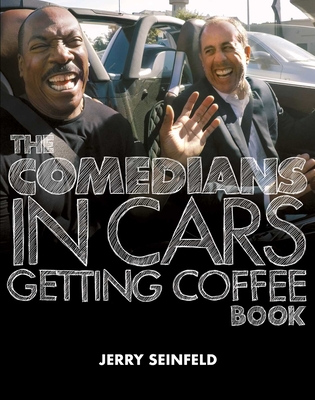 The Comedians in Cars Getting Coffee Book (Hardcover)


On Our Shelves Now at:
A celebration of and behind-the-scenes look at Jerry Seinfeld’s groundbreaking streaming series Comedians in Cars Getting Coffee.

In his streaming show, Comedians in Cars Getting Coffee, Jerry Seinfeld has engaged with some of the funniest people in history in classic cars, coffee shops, and diners. He has reminisced with Larry David; bantered with legends Steve Martin, Tina Fey, and Eddie Murphy; reunited with the cast of Seinfeld; and even paid a visit to President Barack Obama in the Oval Office. These and dozens of other guests talked about the intricacies of stand-up, the evolution of their careers and personal lives, and whatever else popped into their brilliant minds. Seinfeld’s carefully crafted episodes have reimagined the talk show format, each one a unique, hilarious, and yet intimate conversation—a rare opportunity for viewers to witness their favorite performers unscripted and unvarnished. But in producing eighty-four episodes over eleven seasons, he has also created arguably the most important historical archive about the art of comedy ever amassed, with episodes featuring Garry Shandling, Jerry Lewis, Don Rickles, Carl Reiner, and Norm McDonald already serving as permanent shrines for legendary comedians.

Timed to the 10th anniversary of the show’s debut and with an introduction from Jerry Seinfeld, this book isn’t just a record of the show but instead an inventive tribute full of behind-the-scenes photos and anecdotes. The book dives into the inspiration and creation of segments, the most unforgettable lines from guests, an index of the cars, and some of the most memorable moments from crew members. Originally conceived as an “anti-talk show,” Comedians in Cars Getting Coffee earned multiple Emmy nominations and helped lead the streaming revolution.

Perfect for gift giving season, The Comedians in Cars Getting Coffee Book is a beautifully designed book with iconic, never-before-seen production photos which will appeal to comedy lovers, car aficionados, coffee connoisseurs, and Jerry Seinfeld fans.
Jerry Seinfeld is the author of the New York Times bestsellers Seinlanguage, Halloween, and Is This Anything?.