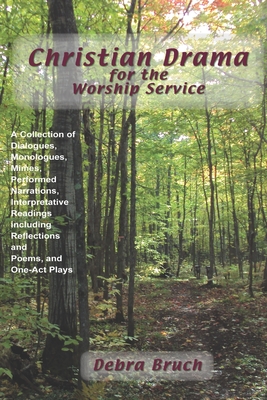 
Not On Our Shelves—Ships in 1-5 Days
(This book cannot be returned.)
Christian Drama for the Worship Service is an amazing collection of various Christian drama forms appropriate for worship and entertainment. Included are dialogues, monologues, mime, performed narration, interpretative readings including reflections and poems, reader's theatre and one-act plays. All have been produced. Also offered are essays about theatre in the church setting, and essays on directing.This book has been selected as a textbook in higher education courses in modern Christian drama.Debra Bruch is an award-winning author and an ordained minister in Community of Christ.
Debra Bruch, Ph.D. is a retired Associate Professor of Theatre and has been writing plays since 1973. Her work has been published and produced nationally and internationally, including Shepherd Witness at the Mickey Gilley Theatre at Branson, MO, Pioneer Woman by Studio Z in Chicago, and A Vagabond Peace toured New Zealand. Debra also chaired a national playwriting competition for the Association for Theatre in Higher Education during the 1990s.