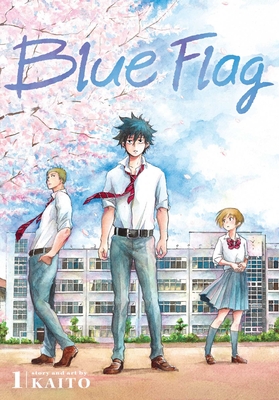 This is book number 1 in the Blue Flag series.

An unexpected love quadrangle with a dash of unrequited love as two classmates, a boy and a girl, begin to fall for each other when each of their best friends have already fallen for them.

Love is already hard enough, but it becomes an unnavigable maze for unassuming high school student Taichi Ichinose and his shy classmate Futaba Kuze when they begin to fall for each other after their same-sex best friends have already fallen for them.

For some reason, Taichi Ichinose just can’t stand Futaba Kuze. But at the start of his third year in high school, he finds himself in the same homeroom as her, along with his childhood friend Toma Mita, a star athlete. But one day, Futaba opens up to Taichi and admits she has a crush on Toma. She then asks for his help in confessing to him! There’s just one problem—Toma seems to already have a secret crush on someone else.
KAITO began his manga career at the age of 20, when his one-shot “Happy Magi” debuted in Weekly Shonen Jump. He published the series Cross Manage in 2012. In 2015, he returned to Weekly Shonen Jump with Buddy Strike. KAITO started work on Blue Flag in Jump+ in 2017.