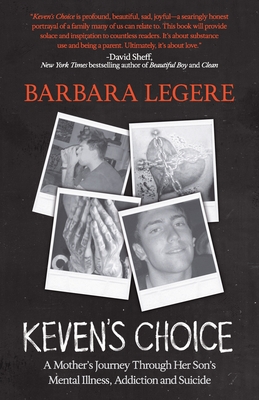 When Barbara Legere's son Keven begged her for permission to die, she refused.

Keven had spent half his life struggling with substance use disorder while his single mom battled courts, healthcare companies, rehab facilities and mental health professionals in an effort to protect him. As their relationship strained Keven's drug use progressed, Legere was forced to accept and love Keven as he was in their limited time together-two years before he took his own life.

In Keven's Choice, Legere tells the story of trying to navigate her son's dark world while also addressing her own complicated guilt and regret over how she handled it. In the process, she shines a light on the hidden anguish of countless parents who are taking care of children that society tells them to abandon.

For parents who have borne witness to overdoses, arrests, treatment, incarceration and even death, Keven's Choice is a raw and intimate memoir that shows it's possible and necessary to go on, even amidst the unimaginable.