Moro Warrior: A Philippine Chieftain, an American Schoolmaster, and The Untold Story of the Most Remarkable Resistance Fighters of W (Paperback) 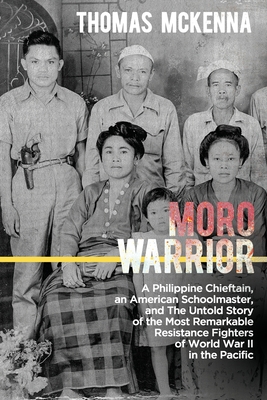 Moro Warrior: A Philippine Chieftain, an American Schoolmaster, and The Untold Story of the Most Remarkable Resistance Fighters of W (Paperback)

Moro Warrior tells the remarkable true story of the Philippine Muslim (Moro) resistance fighters of World War II-the most successful and least-known guerrillas of the Pacific Theater. It is the story of Mohammad Adil, a sword-wielding warrior chieftain commissioned as a junior officer in Douglas MacArthur's guerrilla army while still a teenager. Confident in his secret protective powers learned from a Sufi master, Adil roamed the highland rainforests with a price on his head, attacking Japanese outposts, surviving ambushes, and gaining a reputation as a man who could not be killed.

It is also the story of the colonial official Edward Kuder, foster father to Mohammad Adil and a rare American friend to the Moros, who sheltered him during the Japanese occupation. Kuder was the sole chronicler of the early Moro resistance-an armed opposition so vigorous that the soldiers of the Imperial Japanese Army found themselves outfought time and again by Moro irregulars.

When the soldiers of the Empire of Japan invaded their homeland, the Moros, sometimes with swords as their only weapons, bravely fought on alone after the rapid American surrender of the Philippines. At the urging of Edward Kuder, they later joined the American-led guerrilla movement that emerged in 1943 and served with distinction, but their exceptional contribution to the defeat of the Japanese occupiers and the liberation of the Philippines has never been properly acknowledged. Here, based on the vivid recollections of Mohammad Adil and the wartime writings of Edward Kuder, the extraordinary achievements and sacrifices of the Moro freedom fighters of Mindanao finally receive their full due.