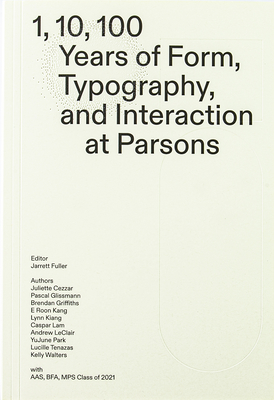 Since the school's founding in the early 20th century, Parsons has had the unique distinction of establishing the oldest graphic and communication design course of study in the United States.

The growth of the program reflects the larger evolution of graphic design as a distinct discipline from advertising. In 1972, the program was formally renamed Communication Design. Over the past decade, the Communication Design program has developed a unique curriculum and has seen tremendous growth from a population of a hundred students in a cluster of sections to close to five hundred across three undergraduate and graduate programs. The intervening years have witnessed an expansion of students hailing from across the globe and fundamental shifts in the way graphic design is practiced. 1, 10, 100 Years: Form, Typography, and Interaction at Parsons captures three distinct moments in time: the last year, the last decade, and the last century.

Communication Design at Parsons is a place held in suspension by the networks it occupies. Though it is a community situated inside a global metropolis that is also one of the world's commercial design capitals, it is not a vocationally oriented program. Experienced educators who have a unique commitment to design practice teach alongside professionals from the highest echelons of the industry and newly minted MFA graduates with independent practices. This dynamic mix is unusual for academically-oriented design schools.

More fundamentally, Communication Design at Parsons espouses a vision of design anchored by a deep commitment to making form in both experimental and pragmatic contexts to address an enduring need for human beings to express themselves through language made visible and ideas made material. These ideas form the two spines of typography and interaction in the curriculum that have become more embedded and pronounced over the last decade.

The emphasis on both typography and interaction in the Communication Design curriculum is a recognition of the historical roots of the field and its negotiation between material form and evolving methods of production. Design education has tended to jettison one or another aspect of making in response to changing conditions of the profession. However, the Communication Design department has taken a broader perspective to view these changes against a meta-narrative of graphic design as fundamentally responding to the tools of production and the generation of meaning that arise through context and criticism. Thus, it is to hold in tension: the printed word and the new languages that will govern expression; the materiality of paper, the screen, and beyond; and the anticipation and criticism of production technology, itself. The result is design's power to shape our networked culture and expand our ability to comprehend increasingly complex, visual environments.

1, 10, 100 Years: Form, Typography, and Interaction at Parsons serves as a retrospective on the evolving nature of the discipline seen through the unique pedagogical lens and work of the teachers and students that form the Communication Design community at Parsons.