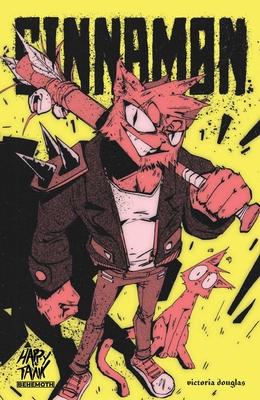 
In Stock—Click for Locations
The beloved Cinnamon is coming to bookstores! Victoria Douglas’ heartful and action packed series stand at a 100% reader score on leagueofcomicgeeks.com. which qualify Cinnamon Vol.1 a must have graphic novel for comic enthusiasm and cat lovers.

Cinnamon is just your perfectly ordinary, average housecat. At least until we get a glimpse of the world through her eyes! Countertops become skyscrapers, cat toys become biker gangs, and perilous giant robots rampage on the daily! Get dropped kicked onto the action packed streets of Big Kitchen City, as she fights the dark forces that dare to keep her from her favorite treat... Catnip!
Victoria Douglas is a nonbinary illustrator and comic artist from the corn-pocked utopia of the Midwest. They hold a BFA from the Columbus College of Art and Design, and have been holed up in an unmarked, underground bunker making comics since 2018. They are responsible for the ongoing comic CINNAMON from Behemoth Comics.