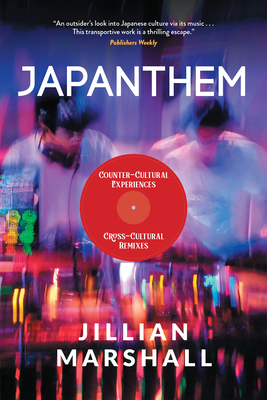 Both personally revealing and informed by years of Fulbright- and MTV-sponsored research, JAPANTHEM's honest vignettes delve beyond the aspects of Japanese culture that have captivated the western world to portray a society's deep relationship with music, and what it means to listen and understand as a cultural outsider.

Following a decade of back-and-forth across the Pacific while researching her doctoral thesis in ethnomusicology, JAPANTHEM author Jillian Marshall reveals contemporary Japan through a prism of magic, serendipity, frustration, unique underground culture, learning life lessons the hard way, and an insatiable curiosity for the human spirit. The book's twenty vignettes -- including what it's like to be subtly bullied by your Buddhist dance teacher, go to a secret rave in woods near Mt. Fuji, meet a pop star at a basement club while tipsy, and experience a nuclear disaster unfold by the minute -- are based off first-hand experience, and illustrate music's fascinating relationship to (Japanese) society with honesty, intelligence, and humor. JAPANTHEM offers a uniquely nuanced portrayal of life in the Land of the Rising Sun -- while encouraging us to listen more deeply in (and to) Japan in the process.

Jillian Marshall grew up in a rural town in Vermont, just south of the French-Canadian border. After graduating from the University of Chicago in 2009, she moved to a fishing village in Japan to teach middle school English. She came back to the US to pursue a doctorate in ethnomusicology at Cornell University, frequently returning to Japan to conduct research on contemporary Japanese music. Following the completion of her PhD in 2018, she left academia +in pursuit of a more public intellectualism. In addition to writing, Jillian currently teaches the languages and history of Japan and China; she is also a lifelong musician, and plays trumpet and piano. She lives in Brooklyn, New York.