Superabundance: The Story of Population Growth, Innovation, and Human Flourishing on an Infinitely Bountiful Planet (Hardcover) 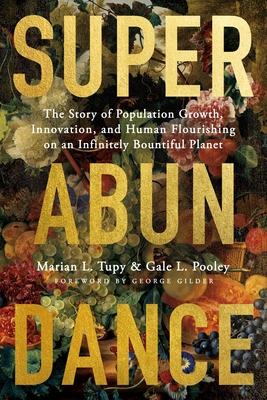 Superabundance: The Story of Population Growth, Innovation, and Human Flourishing on an Infinitely Bountiful Planet (Hardcover)


Not On Our Shelves—Ships in 1-5 Days
"For centuries, the ivory towers of academia have echoed this sentiment of multitudinous ends and limited means. In this supremely contrarian book, Tupy and Pooley overturn the tables in the temple of conventional thinking. They deploy rigorous and original data and analysis to proclaim a gospel of abundance. Economics--and ultimately, politics--will be enduringly transformed." --George Gilder, author of Life after Google: The Fall of Big Data and the Rise of the Blockchain Economy Generations of people have been taught that population growth makes resources scarcer. In 2021, for example, one widely publicized report argued, "The world's rapidly growing population is consuming the planet's natural resources at an alarming rate . . . the world currently needs 1.6 Earths to satisfy the demand for natural resources . . . a figure that] could rise to 2 planets by 2030." But is that true? After analyzing the prices of hundreds of commodities, goods, and services spanning two centuries, Marian Tupy and Gale Pooley found that resources became more abundant as the population grew. That was especially true when they looked at "time prices," which represent the length of time that people must work to buy something. To their surprise, the authors also found that resource abundance increased faster than the population--a relationship that they call "superabundance." On average, every additional human being created more value than he or she consumed. This relationship between population growth and abundance is deeply counterintuitive, yet it is true. Why? More people produce more ideas, which lead to more inventions. People then test those inventions in the marketplace to separate the useful from the useless. At the end of that process of discovery, people are left with innovations that overcome shortages, spur economic growth, and raise standards of living. But large populations are not enough to sustain superabundance--just think of the poverty in China and India before their respective economic reforms. To innovate, people must be allowed to think, speak, publish, associate, and disagree. They must be allowed to save, invest, trade, and profit. In a word, they must be free.
Gale L. Pooley is an associate professor of business management at Brigham Young University-Hawaii. He has taught economics and statistics at Alfaisal Univerity in Riyadh, Saudi Arabia; Brigham Young University-Idaho; Boise State University; and the College of Idaho. Pooley has held professional designations from the Appraisal Institute, the Royal Institution of Chartered Surveyors, and the CCIM Institute. He has published articles in National Review, HumanProgress.org, The American Spectator, the Foundation for Economic Education, the Utah Bar Journal, the Appraisal Journal, Quillette, Forbes, and RealClearMarkets. Pooley is a senior fellow with the Discovery Institute, a board member of HumanProgress.org, and a scholar with Hawaii's Grassroot Institute. His major research activity has been the Simon Abundance Index, which he coauthored with Marian Tupy.Marian L. Tupy is the editor of HumanProgress.org, a senior fellow at the Cato Institute's Center for Global Liberty and Prosperity, and coauthor of the Simon Abundance Index. He specializes in globalization and global well-being and the politics and economics of Europe and Southern Africa. He is the coauthor of Ten Global Trends Every Smart Person Should Know: And Many Others You Will Find Interesting (Cato Institute, 2020). His articles have been published in the Financial Times, the Washington Post, the Los Angeles Times, the Wall Street Journal, The Atlantic, Newsweek, the UK Spectator, Foreign Policy, and various other outlets in the United States and overseas. He has appeared on BBC, CNN, CNBC, MSNBC, Fox News, Fox Business, and other channels. Tupy received his BA in international relations and classics from the University of Witwatersrand in Johannesburg, South Africa, and his PhD in international relations from the University of St. Andrews in Great Britain.