From the Foster House to the White House (Hardcover) 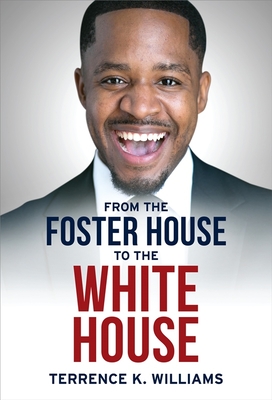 From the Foster House to the White House (Hardcover)

This is the poignant and triumphant story of Terrence K. Williams, who was born into nothing; neglected, starved, abused, and beaten, a product of the

foster home system. He grew up without a table to sit at, let alone food to eat, yet today is endeared by millions of fans and followers...and welcomed at the White House

A heart-wrenching yet ultimately victorious story, you'll cry and laugh as you experience his life through Terrence's eyes. With the odds stacked against him, Terrence believed that a hard life is still a valuable life. He let his deprived upbringing shape him, not destroy him. Surrounded by a victimhood mentality, he pushed himself to reject the acceptance that his life would never be better. Today he's a popular voice for common-sense and a

This is the story of being let down by a system but not letting yourself down. If you're facing challenges and obstacles that seem insurmountable, Terrence's story will inspire and motivate you to find opportunities to grow in whatever situation you face. You'll discover how you can join Terrence as a part of the American Dream

Terrence K. Williams is a popular social media commentator, actor, comedian, and successful entrepreneur. Since posting a viral Facebook Live video in 2016, Williams has become one of social media's most widely-recognized influencers. He's appeared on Hannity, The Greg Gutfeld Show, and a host of other national media outlets, and is a featured comedian on The Deplorables Tour.