The Bs Dictionary: Uncovering the Origins and True Meanings of Business Speak (Paperback) 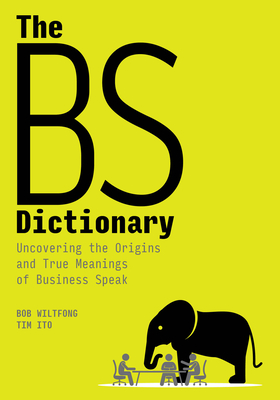 The Bs Dictionary: Uncovering the Origins and True Meanings of Business Speak (Paperback)


Backordered
Bob Wiltfong worked as a correspondent on The Daily Show with Jon Stewart, where he and his crew won a Peabody Award, and as "The World's Greatest Spokesperson in the World" for Nationwide Insurance in TV commercials. Before that, he won several Emmys and the prestigious Edward R. Murrow Award for his work as a local TV news reporter and anchor. Bob has established himself in the corporate world as a much-sought-after consultant with more than 20 years of experience helping Fortune 500 executives with storytelling and public speaking skills. His clients have included General Electric, Charles Schwab, and T-Mobile. Bob is a first-time author who is excited to be publishing his debut work on business speak in spring 2020. Timothy Ito is currently a vice president at the Association for Talent Development, overseeing the content and digital marketing division of the organization. Previous to ATD, he ran the content marketing group for ASCD, including oversight of the business and revenue strategy for ASCD's digital properties. Tim's career has also included stints at America Online and Netscape as the product and strategy lead for AOL e-commerce in careers and real estate and running the business operations for Netscape Japan and the Netscape International channels. Tim is a former senior editor and producer at AltaVista and WashingtonPost.com and was a reporter and writer for U.S. News & World Report magazine. He began his professional career teaching English at a Japanese high school in Tokyo, Japan.