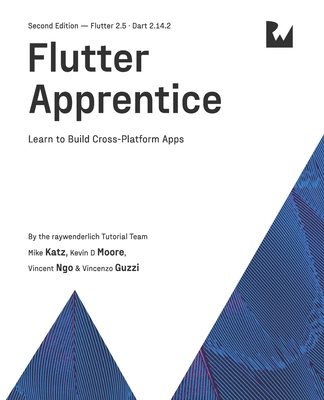 
Backordered
(This book cannot be returned.)
Build for iOS & Android With Flutter

Flutter is an exciting development toolkit that lets you build apps for iOS, Android and even web and desktop, all from a single codebase.

It uses a declarative approach to UI development. You can "hot reload" code while developing, and apps will perform at native speed thanks to its custom rendering engine.

With Flutter and Flutter Apprentice, you can achieve the dream of building fast applications, faster.

Who This Book Is For

This book is for developers who are new to Flutter, and also developers that already have some experience with building apps for the iOS and Android platforms, or web apps.

One thing you can count on: After reading this book, you'll be prepared to create and deploy full-featured mobile apps to both the iOS App Store and the Google Play Store, without having to write two separate apps.