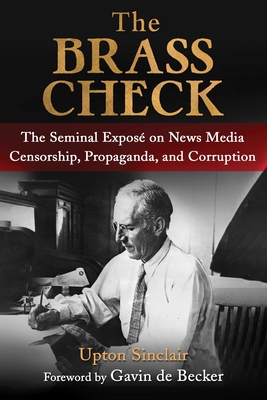 Written by acclaimed muck-racking journalist and author of The Jungle—which documented the inhumane conditions in meatpacking plants in the early twentieth century—The Brass Check is Upton Sinclair's piercing critique of mainstream media's biases in its reporting; how it was not interested in combatting misinformation, but was more heavily influenced by its wealthy owners and their own sociopolitical interests and agendas. Sinclair investigates and conjectures about the power of capitalism and money and its influence over mass media, and cites several contemporary cases, including media's involvement and perpetuation of the Red Scare, the Ludlow Massacre in 1914, the Paint Creek-Cabin Creek strike of 1912, among other examples.

It is one of six books within the Dead Hand series that Sinclair wrote to criticize various institutions and industries that cultivate and influence the fabric of American society. Within the book, Sinclair proposes a handful solutions to hold journalists and media accountable for censorship, sensationalism, and for the accuracy of the content they filter, spin, position, and distribute into the world.

Sinclair himself called it "the most important and most dangerous book I have ever written" and originally published it without registering copyright to the text to increase circulation and subsequently the book's reach to the general public. As a result, the first code of ethics for journalists was established in 1923, just a few years after the book was released. In 2022, it is more relevant than ever.

Upton Sinclair was born September 20, 1878. He was a bestselling American author and journalist who penned more than one hundred books, plays, and journalistic articles during the course of his career. He received the Pulitzer Prize for Literature in 1943. Time magazine called him “a man with every gift except humor and silence.” He died on November 25, 1968.

Robert F. Kennedy Jr. is the chairman of the board and chief legal counsel for Children’s Health Defense. He is also counsel to Morgan and Morgan, a nationwide personal injury practice, and the founder of Waterkeeper Alliance. Kennedy is an esteemed author, with a long list of published books including the New York Times bestsellers The Real Anthony Fauci and Crimes Against Nature, as well as American Values: Lessons I Learned from My Family and Thimerosal: Let the Science Speak. Mr. Kennedy was named one of Time magazine’s “Heroes for the Planet” for his success helping Riverkeeper lead the fight to restore the Hudson River. His reputation as a resolute defender of the environment and children’s health stems from a litany of successful legal actions. He received recognition for his role in the landmark victory against Monsanto, as well as in the DuPont case that inspired the movie Dark Waters (2019).

Gavin de Becker is an American author and security specialist, primarily for governments, large corporations, and public figures. He is the chairman of Gavin de Becker and Associates, which he founded in 1978. He is the author of The Gift of Fear and Other Survival Signals that Protect Us From Violence.
"In 1920, Upton Sinclair, an outsider to journalism, wrote The Brass Check, the first book exposing the press. It was this book, plus a friendship with the author lasting many years, that influenced me and the books I wrote on the press, beginning in the 1930's." —George Seldes

"Though Sinclair’s The Brass Check has been almost entirely forgotten by history, it’s not only fascinating but a timeless perspective. Sinclair deeply understood the economic incentives of early 20th century journalism and thus could predict and analyze the manipulative effect it had on The Truth. He exposes these matters just as he did in The Jungle and his other muckraking exposes—but in this case, he’s muckraking the muckrakers. Today, the incentives and pressures acting on the media are different but they warp our information in a similar way. In almost every substantial charge Upton leveled against the yellow press, you could, today, sub in blogs and the cable news cycle and be even more correct." —The Observer