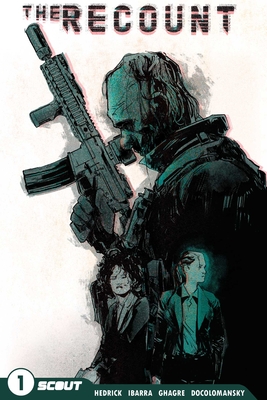 
In Stock—Click for Locations
The Recount is a realistic, action thriller comic book mini-series set in an unsettlingly recognizable American political climate written by Jonathan Hedrick and illustrated by Gabriel Ibarra Núñez and Sunil Ghagre, published monthly by Scout Comics.

When the US President is assassinated by one of his own security detail, a female Secret Service agent named Bree Barto must protect the Vice President at all costs from a mass conspiracy by a group calling themselves 'The Masses'. With nowhere to turn and no one to trust, these two women with completely opposing political views and beliefs must work together to preserve what’s left of American democracy.

Jonathan Hedrick is a comic book  writer/creator born and raised in Brevard County, Florida. Comics have always been a passion of his and he recently began self-publishing his own titles. His current work includes the zombie one-shots Freakshow Princess & Freakshow Knight, the superhero series Capable, and the political thriller The Recount at Scout Comics. Jonathan was also recently included in the Cthulhu Invades Oz anthology. In addition to being a writer, Jonathan is an Army veteran and a  licensed radiologic technologist. He resides in Melbourne, FL with his  cat, Tessa.