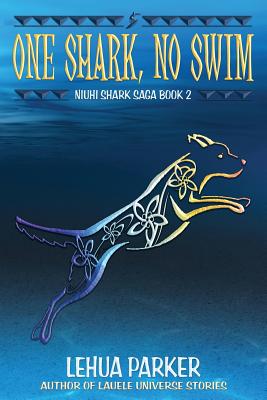 This is book number 2 in the Niuhi Shark Saga series.

With Niuhi sharks, even out of the water, you're not safe.

My dreams are nightmares. I don't dare fall asleep.

Guro Hari's teaching me Filipino knife fighting, but I'm too scared to come out of the bathroom. I'd rather learn Lua and train with Jay and Char Siu, but Uncle Kahana won't let me. He says it's for our safety, but I don't believe him.

Uncle Kahana's obsessed with Niuhi stories, Hawaiian myths about sharks in human form. If he's right, even out of the water, no one's safe.

I have a secret knife I call Shark Tooth. I may have to use it.

That thought excites me.

And that's the scariest thing of all.

One Shark, No Swim is Book 2 in the Niuhi Shark Saga trilogy. Told from an indigenous perspective and set in a contemporary Hawaiian world where all the Hawaiian myths and legends are real, the series explores belonging, adoption, being different, bullying, defining family, and learning to turn weaknesses into strengths.

Through the series, Zader discovers he's not really a boy allergic to water; he's something much more special, dangerous, and powerful. His adoptive brother Jay discovers what happens when the golden surfing star falls from his pedestal and has to choose to make the long climb back from serious injury. It's the ties that bind and support the brothers that allow them to create their own destinies.

As typical local islanders, characters use common Hawaiian and Pidgin words and phrases. The meaning is usually clear from the context, but there is also a Hawaiian & Pidgin Glossary for additional support. Each chapter begins with a related island word or phrase and its definitions. A Discussion Guide for book club or classroom use is included. Free additional classroom support materials are available on www.NiuhiSharkSaga.com.