The Life Of - La Vida de Ritchie (Board Books) 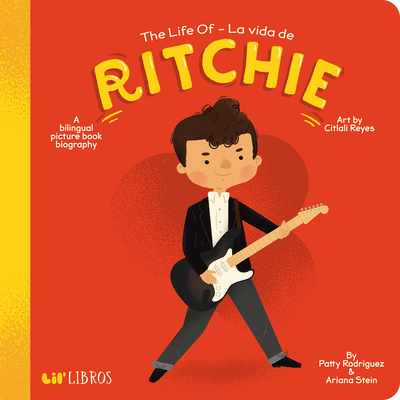 The Life Of - La Vida de Ritchie (Board Books)

Born May 13, 1941, Richard Steven Valenzuela, better known as Ritchie Valens, was a Mexican-American singer, songwriter, and guitarist. His musical journey began in Pacoima, California, at age 5, when his father encouraged him to take up guitar. In high school, he made his performing debut with his band, the Silhouettes. At age 17, Ritchie recorded his final record, which included the songs Donna and La Bamba. That record went on to sell over one million copies. To this day, Ritchie's music continues to live in the hearts of many

Unable to find bilingual first concept books she could enjoy reading to her baby, Patty Rodriguez came up with the idea behind Lil' Libros. Patty and her work have been featured in the Los Angeles Times, Rolling Stone, CNN Latino, Latina Magazine, Cosmopolitan, People En Espanol, Cosmo Latina, and American Latino TV, to name a few. She is currently Sr. Producer for On Air With Ryan SeacrestiHeartMedia, jewelry designer for MALA by Patty Rodriguez, and creator of Manolos And Tacos.

Ariana Stein, a graduate from California State University, Dominguez Hills, has a Bachelor's Degree in Business Administration. Ariana spent the first eight years of her professional career in the corporate world. Her life changed with the birth of her baby boy. She immediately realized that bilingualism played a very important role in his future, as well as the future of other children.