Instincts of the Herd in Peace and War (Hardcover) 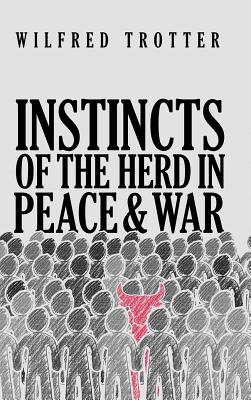 Instincts of the Herd in Peace and War (Hardcover)

Wilfred Trotter's book on the 'herd instinct' was published on the heels of World War I. He had seen how the various nations had engaged in various forms of propaganda and persuasion in an attempt to goad 'mass man' into supporting their respective causes. To him, it made sense. For years, he had been arguing that Man, like all other animals (as demonstrated by Darwin), would be saturated in instincts and as such, prone to being managed like a man manages a herd. World War I served as an experiment which, as far as Trotter was concerned, proved the hypothesis. Trotter's arguments would be taken up by the master propagandist, Edward Bernays, and others bent on being The Man. One hundred years later, the Herd has yet to figure out that their strings are being pulled by other people who have studied them like a farmer studies a cow.