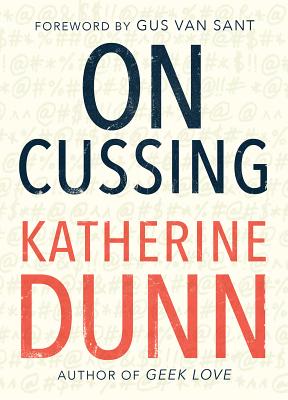 F uck the Fuckity Fuckin’ Fucker. Readers of Katherine Dunn won’t be surprised that this was her father’s favorite sentence, or that, as a young girl, she heard it as a kind of profane poem, a secret song. For many of us, the language of Geek Love carries a similar staying power, born of Dunn’s agile use of language and her strange, beautiful diction. And as a true exegete of the expletive, she remained undividedly devoted to obscenity—both as scholar and practitioner.

In On Cussing, Dunn sketches a brief history of swear words and creates something of a field guide to their types and usages, from the common threat (“I’ll squash you like a shithouse mouse”) to the portmanteau intensifier (“Fan-fucking-tastic”). But she also explores their physiology—the physical impact on the reader or listener—and makes an argument for how and when to cuss with maximum effect. Equal parts informative and hilarious, this volume will delight Dunn’s legion of fans, but it’s also a must-have for anyone looking to more successfully wield their expletives, be it in writing or in everyday speech.

Katherine Dunn was a novelist and boxing journalist who lived and worked in Oregon. She is the author of three novels—Attic; Truck; and Geek Love, which was a finalist for both the National Book Award and the Bram Stoker Prize—as well as the essay collection One Ring Circus. She died in 2016.
[Dunn’s
prose is] a pyrotechnic medium so far removed from our workaday speech that it
feels unfair and inaccurate to call that fire-language ‘English.'
— Karen Russell - Wired

On Cussing is a scholarly and frequently hilarious history of the origins, uses and — as Dunn sees it — frequent abuses of cuss words.

Perhaps no one was more qualified than Dunn to argue the art of obscenity, and she delivers her satisfying crash course on its history and proper usage with Strunk-and-White precision.
— Willamette Week