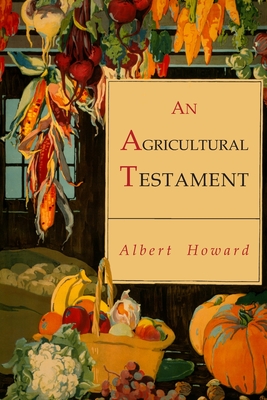 Facsimile of 1940 Edition. An Agricultural Testament is Sir Albert Howard's best-known publication and remains one of the seminal works in the history of organic farming movement. The work focuses on the nature and management of soil fertility, and notably explores composting. At a time when modern, chemical-based industrialized agriculture was just beginning to radically alter food production, it advocated natural processes rather than man-made inputs as the superior approach to farming. It was first published in England in 1940. Since this book first appeared in 1940, it has been regarded as one of the most important contributions to the solution of soil rehabilitation problems ever published. More importantly, it is regarded as the keystone of the organic movement.

Louis Bromfield called it "the best book I know on soil and the processes which take part in it." Soil Science called it "the most interesting and suggestive book on soil fertility which has appeared since King's Farmers of Forty Centuries." And Mother Earth News recently called it "the most basic of all introductions to organic farming by the founder of the modern movement."

The object of the book was to draw attention to the loss of soil fertility, brought about by the vast increase in crop and animal production, that has led to such disastrous consequences as a general unbalancing of farming practices, an increase in plant and animal diseases and the loss of soil by erosion. Howard contended that such losses can be repaired only by maintaining soil fertility by manufacturing humus from vegetable and animal wastes through the composting process. He stressed, too, a little-known nutritional factor, the mycorrhizal association, which is the living fungous bridge between humus in the soil and the sap of plants.