I Am a Woman (Hardcover) 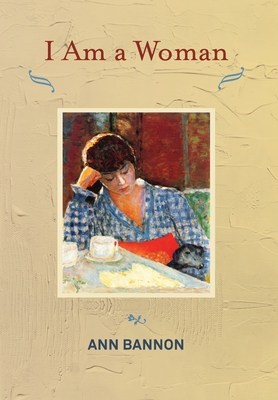 I Am a Woman (Hardcover)

I Am a Woman, first published in 1959, is the second installment of the lesbian pulp fiction series, The Beebo Brinker Chronicles. It follows Laura, a young woman who moves to Greenwich Village and grapples with her recently discovered identity as a lesbian.

Ann Bannon, the author of I Am a Woman, did not live the free-spirited Greenwich Village life of her literary heroines. Immediately after graduating from the University of Illinois at Urbana-Champaign, she married a young engineer and settled down to start a family in Philadelphia. Although she had some suspicions of her own homosexuality during college, she-like many other young women at the time-expected that marriage would resolve those lingering doubts.

After reading two popular lesbian books-1928's The Well of Loneliness and 1952's Spring Fire-she decided to explore similar themes in her own writing. But Bannon's stories were set apart from other lesbian pulp novels of the day through their optimistic tenor.

Prior to Bannon's work, gay characters were generally required to meet a tragic end-either by suicide or mental breakdown. Until the mid-1950s, the U.S. Postal Service would refuse to deliver books if they depicted homosexuality in a positive light. But, by the time Bannon began publishing later in the decade, the outcome of several obscenity trials resulted in slight relaxations of this censorship, giving her the option of delivering more hopeful endings.

Still, this was a time of extreme difficulty for gays and lesbians in the United States. Federal employees were terminated for "sexual perversion," which included same sex attraction. Homosexuality was included in the American Psychiatric Association's list of mental disorders, and frequent raids on gay and lesbian bars landed people in jail for "lewd behavior."

I Am a Woman, finds Laura recently moved to New York City after the painful ending of her first love affair with another girl at her sorority. After dropping out of college, she escaped to Manhattan, intending to close off her life to romance.

In Greenwich Village, Laura is immersed in a new environment more open to homosexuality. She makes gay friends and explores underground gay and lesbian bars. But she is still uncomfortable with who she is, and her life is further complicated by falling in love with her straight roommate, Marcie.

After I Am a Woman's release, Bannon received fan mail from women all across the country thanking her for making them feel normal and giving them hope for a happy ending. The optimism in Bannon's writing was so unexpected some women even reported that the book saved their lives.

Over the next few years, Bannon wrote four more novels-three in The Beebo Brinker Chronicles, and one standalone novel that is loosely related to the series. Then, in 1962, almost as soon as she began, her fiction writing stopped.

Bannon earned a master's degree from Sacramento State University and a doctorate in linguistics from Stanford. She then became an English professor at Sacramento State, and later associate dean of the School of Arts & Sciences. She and her husband divorced when their two daughters reached adulthood.

Immersed in her new career, Bannon didn't realize how wide an impact her works continued to have in the gay and lesbian communities. Her books provided a realistic-if melodramatic-take on the lives of gay and lesbian Americans at a time when these stories were either hidden from view or presented as lurid and tawdry.