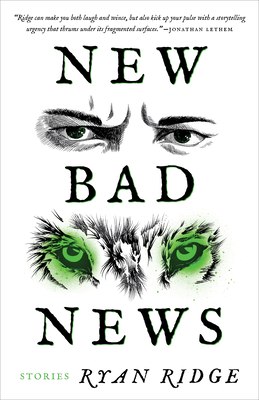 "Ryan Ridge's verbal prestidigitation suggest a more rueful Mark Leyner, and he can make you both laugh and wince, but he can also kick up your pulse with a storytelling urgency that thrums under the attractively fragmented surfaces. His hard-boiled punchlines are rooted in geography and yearning and real American sadness." --Jonathan Lethem, author of Motherless Brooklyn and The Feral Detective

In New Bad News, the frenetic and far-out worlds of fading celebrities, failed festival promoters, underemployed adjuncts, and overly aware chatbots collide. A Terminator statue comes to life at the Hollywood Wax Museum; a coyote laps up Colt 45, as a passerby looks on in existential quietude; a detective disappears while investigating a missing midwestern cam girl. Set in Kentucky, Hollywood, and the afterlife, these bright, bold short-shorts and stories construct an uncannily familiar, alternate-reality America.

Ryan Ridge grew up in Louisville, Kentucky, and is the author of four books, including the hybrid novel, American Homes (University of Michigan Press, 2015), which became the inaugural book club pick of Michigan Library Publishing Club. His work has appeared in American Book Review, The Collagist, DIAGRAM, Los Angeles Review, Lumina, Passages North, Salt Hill, Santa Monica Review, and elsewhere. In 2016, he received the Italo Calvino Prize in Fabulist Fiction judged by Jonathan Lethem. An assistant professor at Weber State University in Ogden, Utah, he co-directs the Creative Writing Program. In addition to his work as a writer and teacher, he edits the literary magazine, Juked. He lives in Salt Lake City with the writer Ashley Farmer.