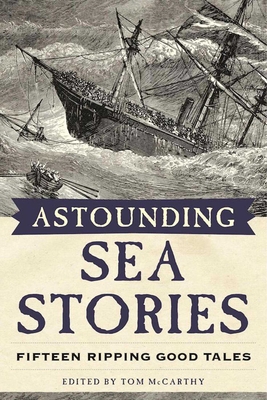 
Special Order—Subject to Availability
“1789 April: Just before sun-rising, Mr. Christian, with the master at arms, gunner’s mate, and Thomas Burket, seaman, came into my cabin while I was asleep, and seizing me, tied my hands with a cord behind my back and threatened me with instant death if I spoke or made the least noise.”

So began William Bligh’s explanation of the infamous mutiny aboard the Bounty. His account of his capture and his phenomenal navigation of a small boat filled with men desperate to survive is one of the greatest sailing stories ever told.

It is just one account readers will find in Astounding Sea Stories—many that have been sitting unread for decades. Some are from master writers whose deserved fame rests on works and characters who lived far from the sea. Here are sea stories from Jack London, his first published work, written miles from the frozen north that he loved and wrote about often—and from Charles Dickens without Scrooge, Victor Hugo far from Paris, and Arthur Conan Doyle on the deck of a ship without Sherlock or Watson. All are hidden gems that make you wish they had written and the sea and ships. Here also are marquee names like Melville and Richard Henry Dana, the official report of the sinking of the Titanic, a first-person account of the wreck of the Medusa, and a story by an unknown captain written after his ship was sunk by a whale. Imagine that.

This eclectic collection will not disappoint any armchair seafarer.
Tom McCarthy first sailed on the Great Lakes, where he grew up. Since then he's added the Arabian Sea, Indian Ocean, and the northern Atlantic off Maine and Cape Cod to his resume. He lives in Guilford, Connecticut.